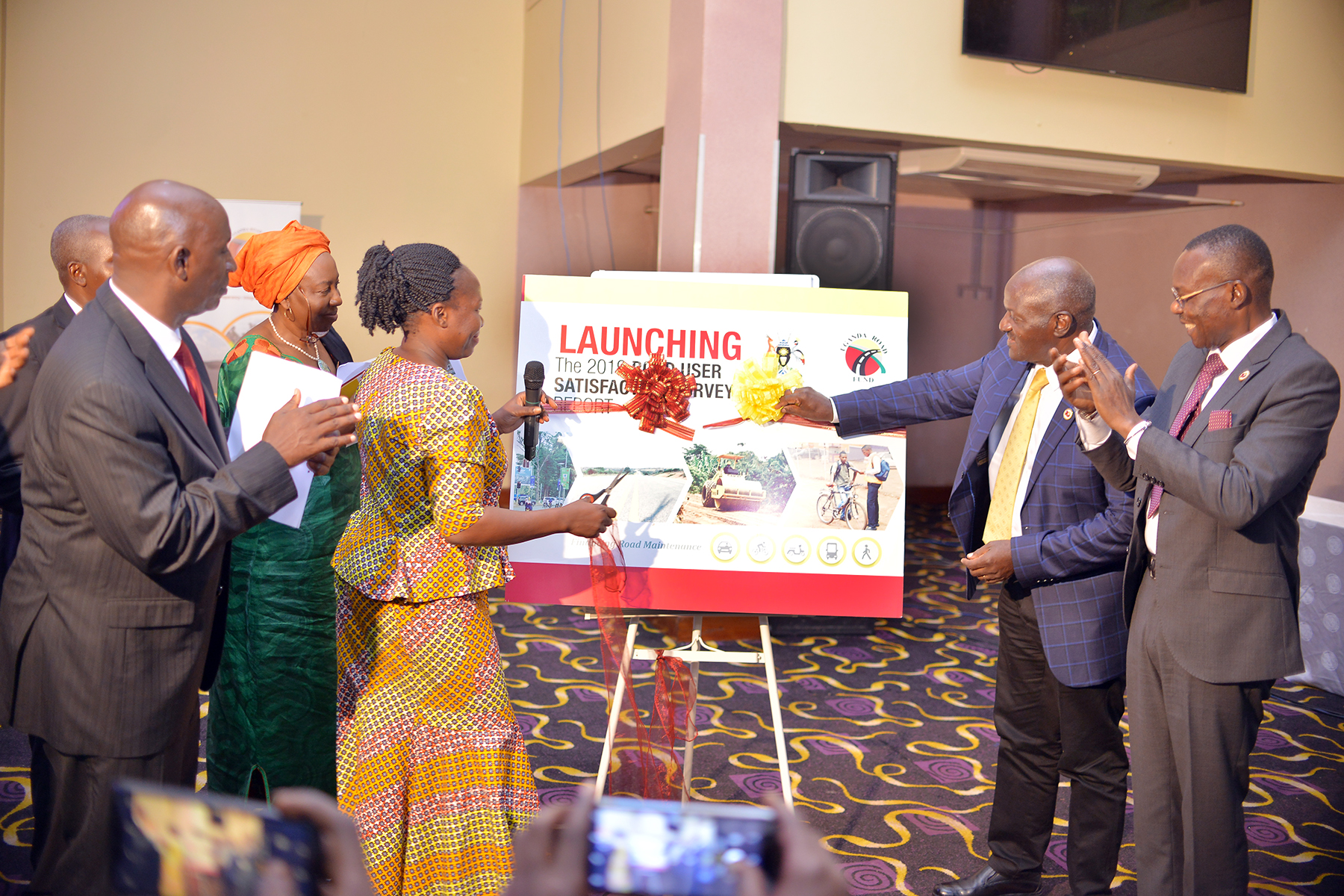 The Uganda Road Fund (URF) recorded an improved satisfaction among road users of the national road network according to the 2019 Road User Satisfaction Survey (RUSS) Report, which was launched at Hotel Africana by the Hon. Jennifer Namuyangu representing the Speaker of Parliament, Rt. Hon. Rebecca Alitwala Kadaga.

The findings from the survey conducted by URF show that there was an improvement in road user satisfaction with road users rating their experience on Uganda’s roads in 2019 at 2.51 points out of 4 compared to 2.17 points in 2017.

The survey report shows that respondents who were satisfied with their experience on Uganda’s road network more than doubled to 57% between 2017 and 2019 with most road users attributing their improved satisfaction to road rehabilitation/reconstruction, maintenance and widening (for national and city roads).

With the exception of security on the roads, national roads were rated better than the District Urban Community Access Roads (DUCAR) and KCCA roads on all road attributes assessed in the survey namely; quality of road surface (smoothness), road signs, road markings, durability, absence of traffic congestion, and absence of potholes.

In her statement read by Hon. Namuyangu, the Speaker Kadaga challenged the Ministry of Works and Transport together with her sister agencies to come up with a lasting solution for road safety which is a major public health concern as evidenced by the carnage and loss of life on our roads.

“Road users cannot be satisfied with roads if they do not feel safe on the same roads. As Parliament, it is our duty to ensure that necessary legislation is in place to provide for the safety of road users. However, legislation alone cannot guarantee the safety of road users if it is not enforced by the implementing agencies. To this end, I request the Minister of Works and the Inspector General of Police to ensure that traffic laws are enforced indiscriminately,” she said.

She said that Members of Parliament have an active role to play in ensuring sustained satisfaction of road users since they sit on District Road Committees (DRCs). “This gives MPs leverage to participate in the planning and prioritizing of road maintenance works at the district level, as well as in providing oversight in road maintenance,” she said.

Eng. Dr. Michael M. Odongo, the Executive Director of the Uganda Road Fund explained that the survey provides a mechanism through which road users can provide feedback to road agencies on the quality of road services. “This report aims to highlight road users’ perceptions about the road network as a basis to inform road agencies on areas that need improvement in order to improve user experiences on Uganda’s roads,” he said.

He added that the survey supports objectives of the Uganda National Transport Master Plan (2008 – 2023) by providing a simple feedback mechanism to road service providers. The report also responds to one of the principles of URF that requires the Fund to ensure

that its operations are designed for the provision of the best services to its customers while maintaining a high degree of responsiveness to their needs.

The 2019 Road User Satisfaction Survey is the seventh such survey in Uganda and the third to be undertaken by URF. Previous road user satisfaction surveys were undertaken by Crossroads under the auspices of the European Union (EU) and the Department for International Development (DFID).

Although road transport is the most dominant mode of transport in Uganda accounting for 99% of total passenger flow and 95% of total goods and cargo in the country, it has not translated into an efficient road network. Majority of Uganda’s road network remains unpaved with many roads both paved and unpaved in poor condition.

Transportation which undermines Uganda’s economic competitiveness in the region,” the report notes.

“High transport costs also impact negatively on the lifestyle and wellbeing of the public since high expenditures on transport leave households with little disposable incomes to spend on essential commodities as well as invest in productive economic activities to generate more income and improve household welfare.”

However, the report also recognizes that a significant amount of dissatisfaction still existed among 43% of the road users. These attributed their dissatisfaction mostly to narrow roads (26%), presence of potholes on the roads (19%), inadequate road maintenance (16%), dust (12%) and poor drainage (9.7%). 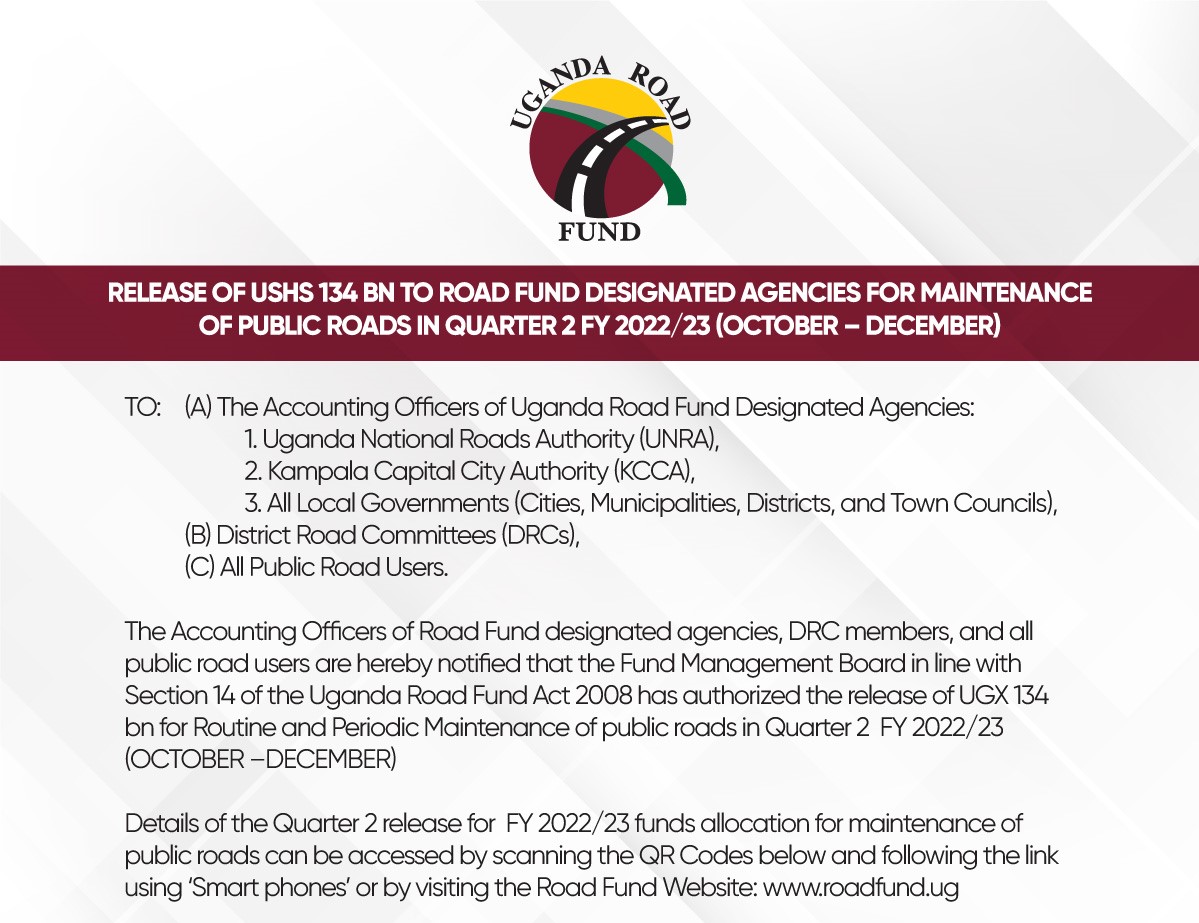 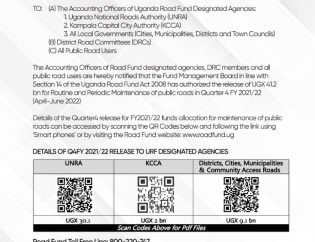